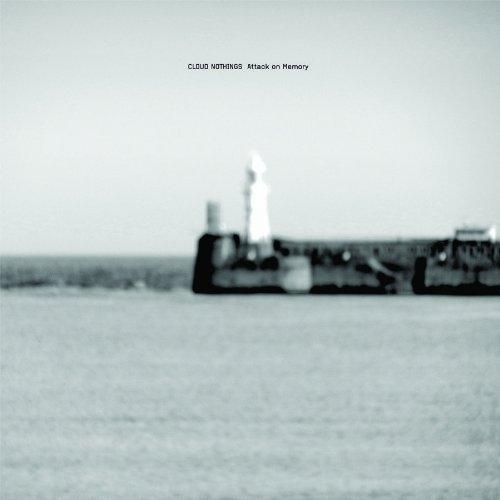 “No Future/No Past” immediately jolted me back to middle school, attired in wide-leg jeans and a Billabong tee, standing awkwardly on the outskirts of a cramped V.F.W. while my brother’s band was playing.  The room was in darkness minus a faint glow from where the cool parents stood, while those taking up the front donned all black and were at the epi-center of personal rebellion.  I’m sure you can reflect upon your own garage band-type of scenario from days past while listening to Cloud Nothings’ third album release, Attack on Memory.

If you were to take The Ramones, slow them down, add a touch of Clinic and the essence of Nirvana you would probably come close to the sound of Cloud Nothings.   Out of Cleveland comes Dylan Baldi, the creator, singer, song-writer, and musician whose other band-mates are only involved in the touring process.   Yet this is no excuse, the lack of production value is more so in the quality of Baldi’s strained vocals than in anything else.  In actuality, the album has a nice crisp sound that won’t send you back to uncomfortable middle school moments by its self.  However, even with his vocals it takes listening to the lyrics and getting involved with the album’s atmosphere to be able to understand it more than just a random local indie band.

My reason for this has to do with the content of the album.  Baldi himself shared how there are only seven tracks due to the amount of depressing substance involved.  Everyone takes devastating emotional pain in a different way.  Some are all Adele about it while others are going to tear their throats with the ferocious struggles they are going through.   Cloud Nothings is clearly the latter.   Welcome to Attack on Memory, here are all of Baldi’s emotions in the form of seven different tracks and you are left to connect and brood right along with him.

So now that you have not disregarded the album because it doesn’t sound like The Killers, I’ll touch on some of the songs off of Attack on Memory.  Instrumentally Baldi knows exactly what he’s doing.  My favorite is “Cut You,” which I agree, seems extremely emo, but Cloud Nothings is able to do this in a faster tempo that covers up the dark lyrics “I miss you cause I like damage…I need something I can hurt.”  “Fall In” is on the much lighter side of things, verses being carried by rapid drumming and chorus’ focusing on the duel vocals accepting the fates with repeated “fall in’s”.  This may sound tedious, but it’s quite fun.  A great instrumental piece is “Separation.” This upbeat part 60s surfer band on speed -part grunge track has a great distorted guitar piece (taking Say Anything’s “An Orgy of Critics” intro one step further).   Most of the songs have extended instrumental portions which are all very well done, entertaining and fulfilling.

My gut instinct is to be disappointed every time vocals start up again because they don’t seem to quite fit the musical professionalism.  This is where I need to remind myself (and you), that Cloud Nothings is not some shiny indie rock band, but a guttural lo-fi indie rock creation that is a refreshing and necessary reminder that rock can still be simple and full of scratchy emotions.  That rebellious attitude rock grew from is completely evident in this album and shouldn’t be compared to anything different, but appreciated for what it’s offering.   When you’ve had a bad day, or maybe recently gone through a bad break up or through another emotional crisis…this is the album you will listen to.   Cloud Nothings’ Attack on Memory has combined the rebellious attitude of rock music with articulate instrumentation and wavering vocals all connecting you to the human conditions of disappointment, humiliation and heartbreak.