Review: In the Valley Below at the Moroccan Lounge 7/24 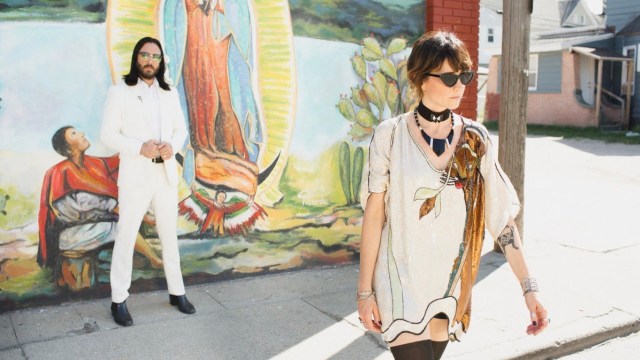 It was my first time at the Moroccan Lounge, so I was doubly excited to see In the Valley Below last week and to explore the recently opened 275 cap venue. After grabbing a quick drink at the bar, I made my way to the stage in anticipation. I had once seen the duo, Angela Gail Mattson and Jeffrey Jacob Mendel, at a private showcase a few years back in a music business class that I assisted at UCLA. They were guest speakers who came in to discuss their rise to notoriety and the nature of the music business from an artist’s perspective. At the end of the discussion, they gave us an unplugged performance, which included their hit “Peaches” – a song that they had written many years back, but had just taken hold of radio. Needless to say, my first encounter with In the Valley Below was unique and gave me an inside look at the lives of the artists, their songwriting process, and the way that they’ve navigated through the business so far.

That acoustic performance on my classroom stage was a far cry from what I experienced at the Moroccan.

Wasting no time at all, they came in heavy with “Stand Up,” giving their audience exactly what they came for. The chemistry between the couple is palpable, and the energy that they project, not only through their instruments and in their vocals, but also in their presence together, is captivating. The obvious love that they share for one another is strong, and is projected through song. It’s actually fascinating to witness; their connection is, maybe not even on purpose, a big part of the show. The surprise power player, for me, was Joshua Clair, whose skill on the drum kit is intoxicating ( I do love my drummers…). Shortly into the set, we were met with a powerful drum solo that took the energy in the room to a whole new level as Angela and Jeffrey looked on in delight. It was one of my favorite moments, I have to say. Josh is hot!

Moving right along, we got “Searching for a Devil” and “Hymnal” from 2014’s The Belt followed by one of my personal favorites, “Pink Chateau” from last year’s Elephant EP. At this point, they were deep in their zone and we were right there with them; Jeffrey’s guitars were blazing and Angela, who at first seemed serious and demure, was blossoming, even smiling and beach,ing more playful on stage. When “Hold on Tight” came around, the room was entranced. It was the perfect moment for the softer ballad. At that point, we were really witnessing the full scope of what this band has to offer. The ethereal tone of the overall set, which was enhanced by their retro esthetic and the magic between the two of them, made this an extraordinary musical (and to be honest, theatrical) experience. As individual artists, they clearly thrive on stage, but even more so as a team. I truly believe that finishing the set with “Lover” speaks for itself in regards to this show, and the band. This is love.

New music is coming soon! Their upcoming sophomore album The Pink Chateau is due for release on Oct. 5 via Bright Antenna Records.

Check out the new video for “Desperate Dance” below and see them when you can!