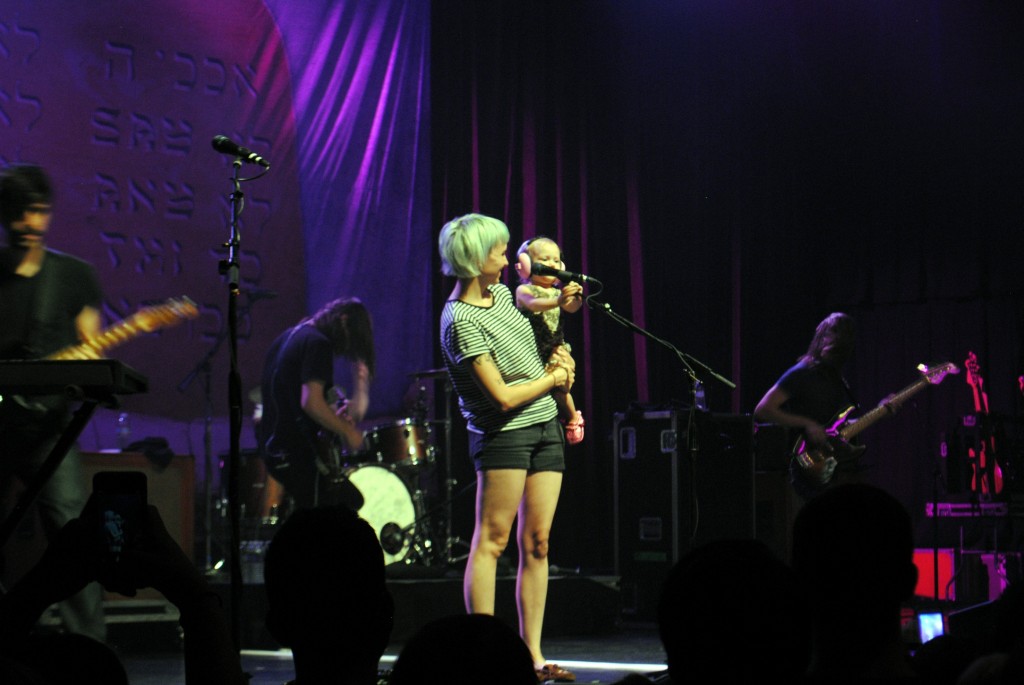 Photo taken by Kate Lock at her “own risk” as crowd surfers poured behind the barricade.

As assumed, the band flooded the stage following a minute or two of celebratory music you would hear at a Bah Mitzvah.  The assumption lies in the most recent album title, Hebrews, broadcasting both a specific and general perception of the “Jewish” ethnicity (in a very Max Bemis-y way).  While some eager audience members were dancing around, others were perplexed by the possibility Bemis had gone all ethnic on them.  Then there were a select few of us whose hearts sank as unknown band members were picking up guitars and striking keyboard keys.  Yeah, we all know that Alex Kent had left awhile ago, we’ve already been through the experience of not seeing Coby Linder rocking out on the drums, and the uncertainty of Adam Siska. Yet, the absence of the twins (Jeff and Jake Turner) and Parker Case was quite a sting.  Though Max rarely gave you the chance to feel sorrow, since of their 200+ songs the “next one” was always a pleasant surprise and needed my full attention.  Yet, at certain pauses, or when my voice required a break, I became very snotty towards these new fellows who I’m sure are great guys.  However, my allegiance towards Say Anything consisting of at least some familiar faces besides Max gripped me and only with the appearance of Lucy Jean, was I able to accept change.

Going back and forth between all five albums, leaving out their Rarities, they were able to throw in about three or four from each.   Never having played “Surgically Removing the Tracking Device” (In Defense of the Genre) before, this was a fresh one to hear live with the presence of Fred Mascherino (former lead guitarist for Taking Back Sunday) who was rocking on the guitar the entire show.  Bemis was jumping and partaking in his typical emotion-induced body movements as always and was beyond ecstatic to hear the crowd singing along with the new ones.  His conversing with the audience remained as humble, fluid, and realistic as usual, causing you to chuckle and think…this guy is wicked rad (note, House of Blues Boston).  Besides belting it out and offering the gang portion of the gang vocals, one of the best parts of the show was when wife Sherri came out to sing her parts of “Cemetery” holding their headphones-adorned daughter Lucy.  Now if you follow either Max or Sherri on any social media outlet, you are fully aware of Lucy’s cuteness and though your parents are great…you kind of wish you had parents as cool as Max and Sherri.  Either way, she’s adorable and while Sherri was waiting for her time to sing, Lucy was drumming away on the microphone.  When the song finished, and the audience was losing their minds, the Bemis family made a thirty second private circle.  Having been a Say Anything fan for many years, it was just extraordinary to witness the positivity and beauty Max’s life became where five years ago, he had quite a few things working against him to ever continue creating music, never mind starting this precious family.  As the two exited the stage, Max responds to the crowds screams with, “Have we killed you with cuteness?” inducing female high pitched reactions everywhere.

Sweat soaking through jeans is a very disgusting feeling, yet as physically uncomfortable I felt my adrenaline was still heightened as we were walking past Fenway Park on our way to the car.  Never disappointing, only rewarding in every sense remains my reaction to every Say Anything show I’ve ever been to.  Biased, absolutely, but only to the degree that I know every song sung.  My skepticism remains if Max were sitting, didn’t give his 110% or, besides being the wrong people, the band sucked.  I’m not telling you to learn all 200+ songs to have a good experience, just learn a few of the popular ones.  The energy and intensity surrounding you and thrown at you will suffice for the ones you don’t know.

Check out the rest of their tour dates to see if they’re playing near you and pick up the album here.