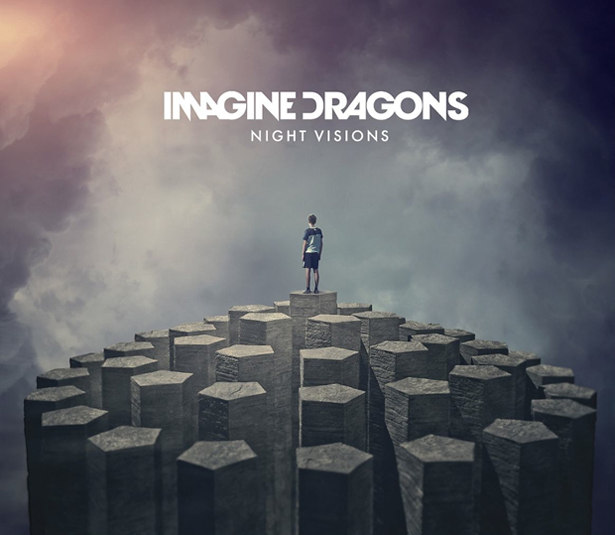 I’m not a fantasy world meets rocker visionary, I like both things separated, thank you. The first time I heard “It’s Time,” was alongside the video, which was a damn shame since my taste buds rejected this combo. Fast forward a month and I was persuaded to check out their EP (Continuing Silence). This was great advice. The first track “Radioactive,” took me by such surprise, I was facebook’ing the track before the song even ended. That EP was on repeat for about a week. Fast forward again and I was introduced to the live video of Imagine Dragons’ “It’s Time,” where stomping and clapping were carried throughout. Obviously I was hooked. Now whenever I hear the single, which has found its way on my local radio station, I simultaneously stomp and clap (it’s probably safer to not be driving near me when Imagine Dragon’s is broadcasted). September 4th is the release of their first LP Night Visions [Interscope/KIDinaKORNER] and the excitement of what could be on eleven tracks, seven of which are brand new, was built to a nerve-racking level.

Nerves were calmed as Night Visions was satisfying, continuing with The Fray and AWOLnation comparisons and throwing in some Clash action, 80s pop, and I even picked up some Ladysmith Black Mambazo-esque vocals. Yikes. That’s a lot of fun stuff all rolled up into a full length album by newcomers to the national music scene.

“It’s Time” starts you off, and it doesn’t sway from the EP/radio version. Since there isn’t exactly reason to. “Tiptoe” welcomes you to their first new song, something fresh with pop-rock influences, with a slowed down bridge forcing gang vocals and a drifting guitar with flirtatious synth. “Radioactive” hits you hard and fast, losing any predetermined thoughts you had on Imagine Dragons and attractively sounding like their touring buddies Awolnation. “Demons” has this great beat that becomes your travel buddy throughout the highs and lows, choruses and verses and only takes a break to get a blast from Dan Reynolds’ highly intensified vocals. My favorite cheery-two-stepping song follows, “On Top of the World” that not only contains fast-paced clapping, but also the most positive energy legally allowed in one song. Absolutely everything about this song is jubilant, because after all you are “on top of the world.”

As for fresh meat, “Amsterdam” is the second new track with a great vocal and guitar melody, precluding to a fabulous thick and dirty guitar solo heading up the final chorus. The following track “Hear Me” has this atmosphere of a popular-sold out mega venue-rock-band sound, with a power-house rising bridge capping off into head-back, pump-fisting finale. As we travel into the rhythm and blues flavor Imagine Dragons are able to produce on “Every Night,” reflective of “Round and Round” on Continuing Silence. With a melody you could picture Bruno Mars delicately swooning that transfers you to a thicker rock sense when you hear the “Ohm”s and you need to remind yourself you’re not listening to Paul Simon’s “Diamonds on the Soles of Her Shoes.” Sticking with hip hop beats “Bleeding Out” strikes up the tempo and brings on the shifting shoulders dance move and Baptist church overhead clapping. There’s also a faint whistling which sparks a glint in my eye. Xylophone tinkering introduce “Underdog,” which you soon discover has a killer vocal melody with enough transitions to keep you on your toes. This is surrounded by Passion Pit synth, confusing your muscles on how to properly move to this groovy tune (absolutely a good thing). The nine minute ending to Night Visions (“Nothing Left To Say / Rocks”) has quite a dynamic sing along chorus that always peaks at an intense level, think Pink’s post-chorus in “Blow Me (One Last Kiss).” Slow and passionate violins carry the song over to the assumed “Rocks” portion. Getting up and zydeco dancing seems about the right fit for “Rocks” and Paul Simon influences are jumping around your head forcing your hips to sway in quick succession.

The second the falsetto and perky drums are abruptly put to an end, you immediately put the album on repeat, realizing that learning the words is mandatory, for Night Visions is functioning on a sing-along level with added air guitar. Where Imagine Dragons are able to go on Night Visions is not only an extensive sweep of genres (rock, r&b, Caribbean) but it is done where you are still classifying every song as an Imagine Dragons hit. This is the type of catchy album you can classify as “great pop-rock” and be confident in doing so, making lesser bands realize they need to watch out and step up their game. Night Visions is proving that if you’re going to be on the radio, you should have track after track of unique hits with great melodies.