Warning: session_start(): Cannot start session when headers already sent in /home/customer/www/killingthecabinet.com/public_html/wp-content/themes/massive-dynamic/functions.php on line 5
 So Tantalizingly Hot, It Seem To Have Froze: Empire of the Sun’s Ice on the Dune

So Tantalizingly Hot, It Seem To Have Froze: Empire of the Sun’s Ice on the Dune 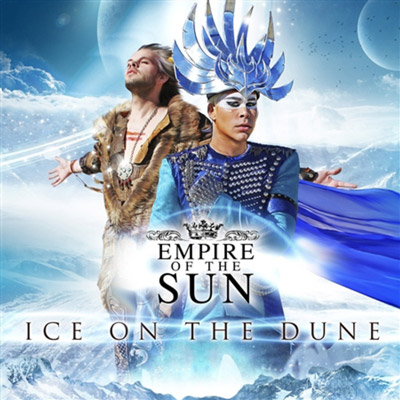 You never felt you received the jolt of dance melodies and beats from Daft Punk that you were yearning for?  You need an upbeat soundtrack to your summer that capitalizes on falsetto vocals and 90s synthpop?  The approaching extended days with warm nights will be requiring a musical ambiance and you haven’t found one yet?  Empire of the Sun’s Ice on the Dune is the answer to all of these problematic situations in your life, and then some.

This Australian duo has been on the scene for a handful years with their 2008 release of Walking on a Dream which received more mixed reviews in the states than it did back home.  After a few hazy and muddled years later they announced their sophomore album Ice on the Dune and their touring to go along side it (mostly festivals; Bonnaroo, HARD Summer Music Fest, Breakaway Music Festival, etc.).   On tour they can come off a little radical so depending on your tastes I’ll say either “try not to be too skeptical of their futuristic Mayan costumes,” or, “oh man…they even have sweet futuristic Mayan costumes!”  Personally, I refuse to watch their videos (unless someone wants to really persuade me otherwise) because I can’t handle combining the fantastic upbeat catchy melodies with costumes that are more permanent than not.

I should probably talk about the music now.

Turning, speeding, and twisting up Brian Eno’s Lux-like instrumental pieces (coincidence?) into a smashingly tantalizing orchestrated introduction to Ice on the Dune enters “Lux.”  A little dangerous and mysterious, it floats in and lands boldly with confidence and fantastical captivation.  Arriving in style, with all of the bells and whistles you are now enticed and holding your breath that there will be more like this.  Breath held, fingers crossed.  “DNA” takes one step..then another.  The chorus slams you hard loosening your fingers – for they no longer need to be crossed, your wish has been granted.

“DNA”’s catchy disco beats in the background with MGMT’esque vocals throttled with flashy synths are all you have been longing for.  “Alive” slides in next and as their single, you probably are singing along at this point smiling with joy at how lavishly it fits within.  At first the onslaught of splashing pop hits prevent you from recognizing one track from the other, all you are aware of is the back and forth motion your body is undergoing and the jubilation rising inside.   Every chorus is a masterpiece of catchy melodies, one fabulous 90s dance hit after the other being struck violently with a modern twist so that you never feel like you’re listening to something “old.”

Some tracks usher more indie synth than dance (“I’ll Be Around,” “Keep A Watch”), pulling the threads of appreciation throughout.   As opposed to their previously DEVO style, when they’re not piling on groovy beats with their notable dance tracks, they are now settling into a trendier taste.  This movement will allow for easier access into the hearts of those longing for uplifting beats to relish in and move to.  Not only captivating those who “just want to dance” for Ice on the Dune holds musical greatness.  Stylistically there are nicely woven beats layered on beats with background whispery vocals amplifying the intensity so that this duo is always one chord above your anticipation.

Summer has officially begun, don’t let yourself be at a party and embarrassingly ask “Who is this?!” to the blasting atmosphere Empire of the Sun will be creating.  Control your destiny and be the introducer of colossal tracks like “Celebrate,” “Surround Sound,” and “Concert Pitch” among so many others.   Welcome to the Summer of 2013, let Ice on the Dune always be within your reach.