*Disclaimer:  Choosing the Twilight Soundtrack does not reflect upon anyone at KTC’s enjoyment of the Twilight Saga (movie or book). 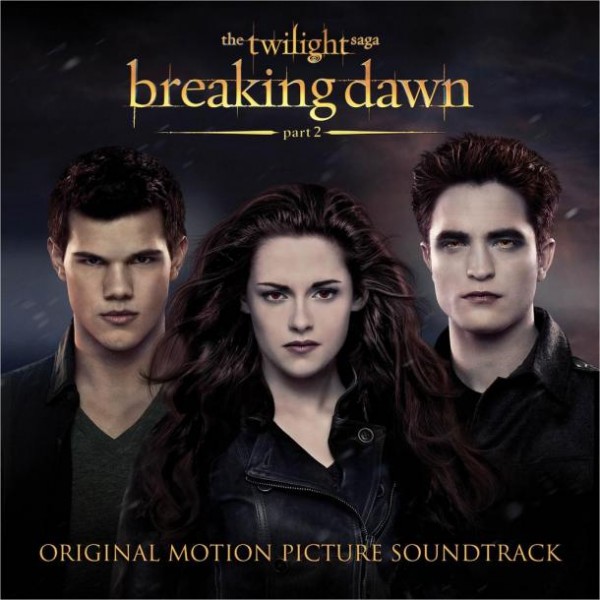 Yes, the disclaimer was absolutely necessary.  I’d like to also add to not judge a soundtrack based on the movie it represents, rather take it for the theme, which in this case must have something to do with insatiable and powerful love (this is an educated guess – for I have never seen the movie nor read this book).   A heart-stopping, do anything for, kind of love seems to run through the soundtrack at a delicate and sultry pace.

Twilight soundtracks have always been known to be (surprisingly?) well created, with artists and their songs being well written, performed and many times catchy.  Remembering back to the first, I recall falling in love with the songs, though I dare not crumble to any part of the Twilight fad.  Now that I have heard bits and pieces of others, I can confidently say – they are pretty great soundtracks.  Becoming a source for newer artists is one of my favorite highlights.  Finding a handful of songs you connect to, you then instantly find yourself researching these artists and pulling up singles and albums.

Twirling melodies accented with soft vocals, all flowered over acoustic guitars, piano, and percussion.  Most of the tracks fit this description flawlessly, though with different artists it results in a uniquely arranged and assorted moments on a complete album sound.   Creative and intelligent easy listening music is what we have here, and it’s no Peabo Bryson and Barbara Streisand.   The moments of impact hit you softly with steadied emotion, direct lyrics, and rather than belting vocals, the whispery falsettos create a different kind of dynamic, though equally affecting.  Green Day and Passion Pit make appearances among the more, folk or indie genres, but also follow suite to this fixed mellow mentality.  This again, makes for a sense of completeness.

Placing you in a fantastical relationship, you are blown full course throughout the highs and lows (but mostly the highs).    POP ETC’s “Speak Up,” has a Vampire Weekend dipped in Animal Kingdom feel, set to carousel-esque synth and perky transitions.   This is one of the faster paced tracks, whereas the slower possess more soothing melodies, like in A Boy and His Kite’s “Cover Your Tracks,” Reeve Carney’s “New For You.”  The latter being the closest you could picture stumbling upon on Delilah.  Feist’s “Fire In The Water” is, unsurprisingly, eerie and a little on the darker side, though in the most dainty way possible.  You also find forbearance on a few other tracks – I did say you were placed in a relationship…

Breaking Dawn:  Part 2 is a soundtrack you can sink into without having any prior knowledge or relation to the popular saga.   Feelings of undying love and pain are slathered in soft-spoken duets and quiet crooning.  With a focus on melodic transitions echoing the swarm of passion in the lyrics, this album takes easy listening to another level.

Tags: Fixing Vanessa, Cover Your Tracks = Jimmy Eat World’s “Hear You Me”, Twi-hard, The end is near!<<<—CLICK AND WATCH!!!