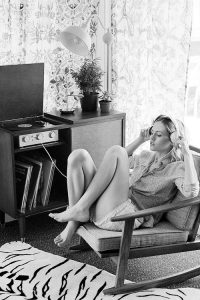 Let’s face it, 2016 left us in a blur of tunes that we’ll be forever catching up on.  I don’t know about you, but I have a list of at least five albums I hadn’t had the opportunity to sink my teeth into.  However, our evolutionary-American need for “more, new” overtakes the rewind button and here I am hopping on the 2017 train and snagging up all flashy beats, cool vibes, and fresh vocals.  Then I sift through them, letting all redundant and not-so-special tracks play on in other avenues as my scouring continues.   At this point I began to question my intentions, a killer song should just tag you unexpectedly without all this searching….when I find something will it actually be a valid recognition of worth or more relief at finding something acceptable?   Then of course the other factor is that it may have nothing to do with the search, but more-so where you are when you’re listening, who you’re with, the mood you’re in.  These factors will take a song you’ve already processed through in one scenario become a new beast all together in another scenario.

Driving among the newly snowplowed snow, I had slowed down my hunt and was just enjoying some new tracks the weekend had delivered.  Almost home, I literally laughed aloud at my lack of intuition and humor of the music gods.  An intriguing song was about 30 seconds in when I checked to see who it was, and to my surprise it happened to be one of the many I had deemed unworthy about 10 seconds in a day before while sitting at home (“Not into the vocals,” “sounds like other stuff,” “doesn’t suck me in”).   I ended up listening to it about three times on repeat, being captivated by the little vocal melody intricacies and choir involvement pillowing the track into it’s conclusion.

Because music is our soul, energy, therapy, and in every breath that’s inhaled it is only inevitable we’ll be taken in another path depending on multiple factors that effect our senses.  A day later, in a car surrounded by the stereo as opposed to headphones, I was transported into a completely different world that I had shook my head at 24 hours beforehand.   I clearly need to give certain tracks a bit more of a chance, it’s not like I work in a music factory.  Additionally, I should know better especially seeing how a musical moment like a bridge can make or break a song in a single swoop of transition.   As we’re all out there listening to the newest and freshest, allow for some unforced chances and maybe you’ll come up with a lovely surprise like I had with Ten Fe‘s “Twist Your Arm.”