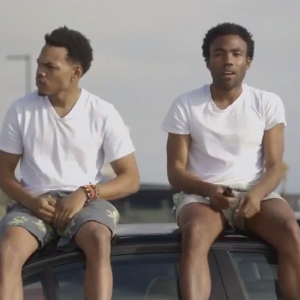 Childish Gambino “The Worst Guys”
Donald Glover and his boy Chance the Rapper have a little gathering on the beach with a few friends, smoking blunts while catching some waves, and enjoy a sunny California day. It’s underproduced, the realness of the video is inviting and creates a sense of wanting to join in on the fun. The song comes from Because The Internet, out tomorrow.

Jon Hopkins “Collider”
This video for the British producer’s latest release exemplifies the environment of the album Immunity (released earlier this year via Domino Records): a fiery blend of house, techno and electronica. The album was nominated for the Mercury Prize, creating quite a buzz similar to that of the young lady who stars in this magnificently translated video.

Metric “Lost Kitten”
This is what I hope to see every week in music videos. Georgous scenery, artistic and elegant choregraphy, with a storyline as colorful as the environment (in this case, Mexico). A wonderful gay, black man wanders in search of his “House Mother” who in the end we find is a beautiful white woman.  One of the interpretations I read explained that the house mother refers to a woman who ran a “Fashion House” of sorts back in the 60’s and 70’s where gay men, usually of color, who ran away from “home”  would go to live peacefully with like minded individuals.

Lorde “Team”
It’s a secret society of young, sweaty misfits who don’t necessarily have to win to be accepted and appreciated, a dream Ella Maria Lani Yelich-O’Connor once had.

Blouse “A Feeling Like This”
Portland based Blouse have released their first video for this year’s Imperium. It’s simple, low budget and pretty awesome to say the least. The melancholy vibe and the sincere wonder that’s created is intriguing. And we never really discover what it is they are all waiting for…