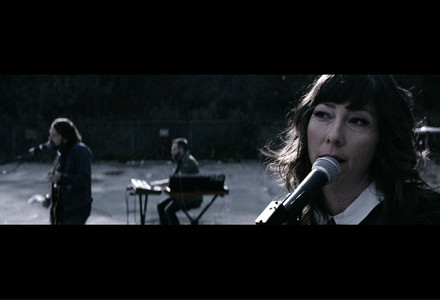 Silversun Pickups “Cannibal”
I love this song! The video is great, too, I just wish we could see the cannibal attack in the end! Okay, I’ve been watching way too much Walking Dead. Honestly, the best part of this is the footage of the band playing and seeing Nicki back in serious action after giving birth to twins last year. I seriously cannot wait to see these guys live for the FIRST time, hopefully this year…

London Grammar “Hey Now”
Beautiful song, interesting video. I thought of it like this: light is an energy force and it’s bouncing around in the deep abyss of a dark forest, absorbing into the earth and manifesting into a physical interpretation of that energy which is reflected back in the form of, well, a head…? A head with lots of hair. I’m into it.

Kaiser Chiefs  “Coming Home”
Super cool one shot video (that they probably shot 397 times) with all kinds of interesting scenes throughout. The song has grown on me after 3 listens, and I’d suggest checking out some older tunes as well before you judge.

Rebecca & Fiona “Candy Love”
There’s something very robotic about the Swedish duo that I both love and hate at the same time. I would lean more towards the first if they actually dropped some bass, but they don’t. Mediocre beats and auto-tune aside, the video is pretty rad. I love the treatment, the colors and the glam make this video appealing and you can really get a feel for who these girls are as a unit. Super hot, for one.

Pussy Riot “Putin Will Teach You How To Love”
I don’t even know what to think of these girls, they take such bold and dangerous action in the name of political and social unjust and I appreciate that, yet it also causes some alarm. These girls were just recently released after serving two years in a Russian prison for “hooliganism” after a one minute performance at Moscow’s Cathedral of Christ the Savior. Their intention was to draw attention to Putin’s leadership at that time as well. I watched the full video of the beatings that they endured and it was pretty brutal. The punk rock chicks and that dude have some pretty big you know whats.