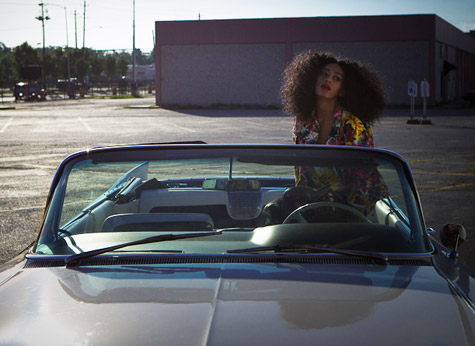 I’m as surprised by the video as I am by the song; it’s a haunting, futuristic tale of poisonous trees mutating humans and one man’s love for another who has been infected with the tree’s drug. It’s the second release form the duo’s self titled album, out now!

Bass Drum of Death “Bad Reputation”
For a minute there, I felt like I was watching a young me. This one is a bit disturbing, I’m not going to lie. Just everything about it. But interestingly, it seems to fit the song perfectly.

Solange “Lovers in the Parking Lot”
I’ve been waiting for Solange to release another video after last October’s “Losing You” (one of my favorite videos of last year) and she did not under-impress. Staying true to her own, “Lovers in the Parking Lot” is a sincere expression of Solange’s style: unique dance moves and swagger like a boss. The song, from her 2012 EP True, is great too.

FKA Twigs “Papi Pascify”
It was released more than a week ago but I felt compelled to post it because of I really like the song, and the video is kind of..wow.  This is definitely a PG13 video, so heads up on that. But it’s beautifully intimate, artistic videography and it’s being heavily praised as an inspirational creation. It’s the second track from her recently released EP2, four songs of sexy yet haunting r&b.

Tegan and Sara “Goodbye Goodbye”
These sisters really know how to write a great breakup song and this one is no exception. I like how era-relevant this video is. How funny will this be in a decade?  It shows different people going through the everyday emotions of a relationship ending, using social current media as the form of communication. Very 2013 of them.