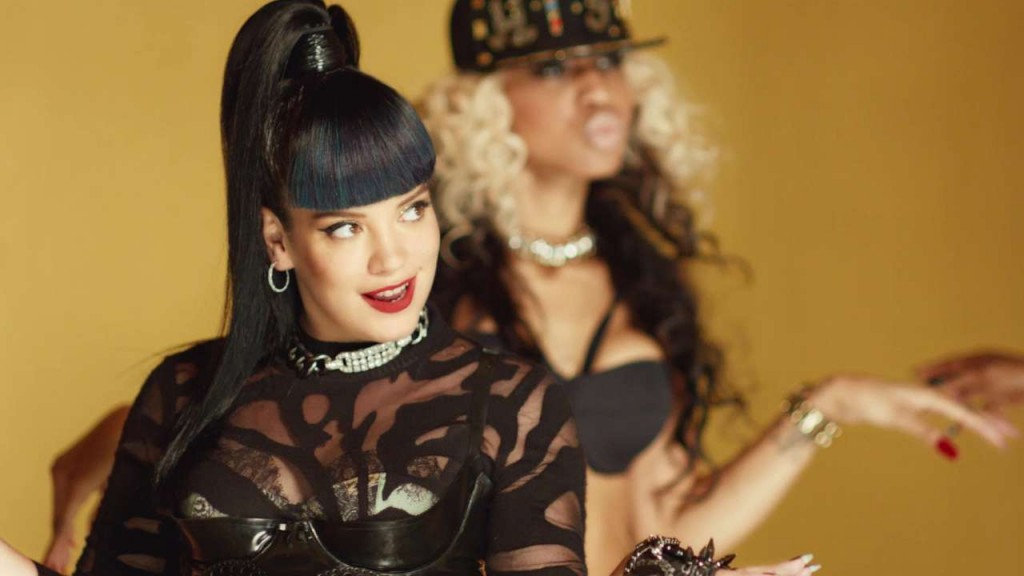 Despite the immediate media backlash after the release of “Hard Out Here,” I adore Lily for stepping out after a four year absence with a song and video that holds such a strong feminist message of double standards and sexism in the music industry. The video is colorful and funny and pokes fun at the state of our mindset today. Contrastly, she chose to utilize the exact tools that she is standing up against in the song: sexy, scantily clad women dancing provocatively, licking inanimate objects, etc. But still, her point is being made.

Kitten “Like A Stranger”
Chloe and the boys are back with their latest single (that I’m finally starting to like after a few listens and seeing it live). Last week at the El Rey (read our review here), she had a whole new band playing with her (minus the keyboardist) but the original members were present for the “Like A Stranger” video, leaving me questioning what the real deal its behind the mysterious “new” bandmates. Either way, the 19 year old looks amazing, showing off some of her signature moves which are always entertaining. Never a dull moment with this girl.

Rihanna “What Now”
Rhi Rhi looks as stunning as ever in a simple silk gown, locked away in what seems to be a mental institution of sorts, feeling and acting out the pains of whatever it is she’s going through. The creepiness of this video is most intriguing as her body convulses and contorts in an eerie manner. I feel her, though. The song is powerful and the video exemplifies the insanity that one feels at the point of giving up, letting go, and waiting it out. As a non-Rihanna fan, I really enjoyed her this time around.

Rumtum “When”
Anyone who knows me knows that I love camels. And elephants. And both make cameos in the ultra cultural new video for one of my newest musical finds, Rumtum, who we featured in an Up Next in September. I think I love this video so much because I have an incredibly ADD mind that can’t sit on one image for too long at a time, and here we get the opportunity to see and experience mini clips of really interesting and beautiful life moments around the world. The song comes from the recently released Mystic Wonders [1320 Records].

M.I.A. “Y.A.L.A.”
This is definitely one of those videos that would be better on some sort of mind altering substance but I like it sober because it’s bright and colorful and M.I.A. is a beautiful badass. If you really read her lyrics, you’ll find that although she seems to be quite the shit talker, she knows what’s going on in the world and she puts it out there in a way that almost camouflages the truth so that it can be said. The song itself takes a shot at the YOLO phenomenon (You Alway Live Again) and touches on things like offshore banking and karma. Get it girl.