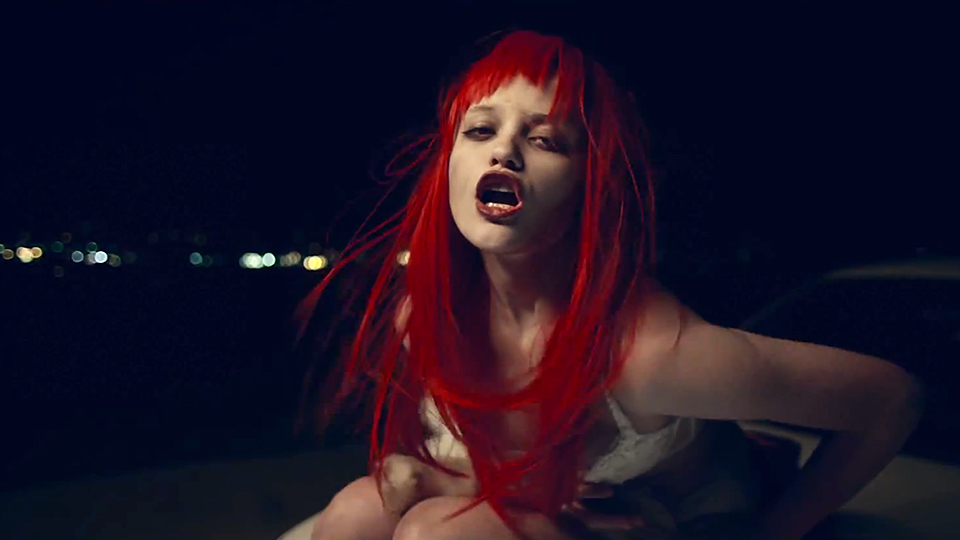 Sky Ferreira “Night Time, My Time”
The title track for her ktc acclaimed new album would not have been my choice for the second single but it works after watching the heroin chic video directed by Grant Singer. Wearing colored wigs and next to nothing else (not complaining) Sky looks beautiful, the eerie lighting intensifies the beautifully dark mood of each scene. Sky looks disturbed and sexy simultaneously, an image that seemingly defines the rising starlet to date.

Eminem “Rap God”
In his video for what I consider to be the best song on a not so great album, Marshal Mathers channels his inner Max Headroom, an 80’s CGI TV host known for his distorted, electronically sampled voice, along with other 80’s/90’s pop culture phenomenon. It’s an impressive 6 minutes and 10 seconds auditorily and visually.

Major Lazer “Sweat”
The blacklight neon dance art video from director Ryan Staake is slightly reminiscent of last month’s M.I.A. “Y.A.L.A.” video but not as hard on the eyes (no flashing) . The song, a collaboration with Dutch producer Laidback Luke and rapper Ms. Dynamite, comes from this year’s Free The Universe.

Freddie Gibbs “Deuces”
Because I knew what was coming, I was cringing throughout the entirety of the video but I couldn’t bring myself to turn away. We’ve all seen it before but experiencing the build up and seeing the moment of the famous ear bite on top of this hard track is exceptionally entertaining. I love listing to this song through my Beats!

Twin Shadow “With Or Without You”
The video is simple, the song we’ve heard a million times. Yet there’s something really special here: George Lewis Jr. aka Twin Shadow’s version of the U2 smash is slightly melancholic and the video is representative of that feeling with flashes of black and white images beside the singer performing in the studio against a white background. If I didn’t love the way this rendition of the song sounded, it wouldn’t have made my list; however, the emotional value is of importance here. The song and the video combined created a feeling that I felt I should share.