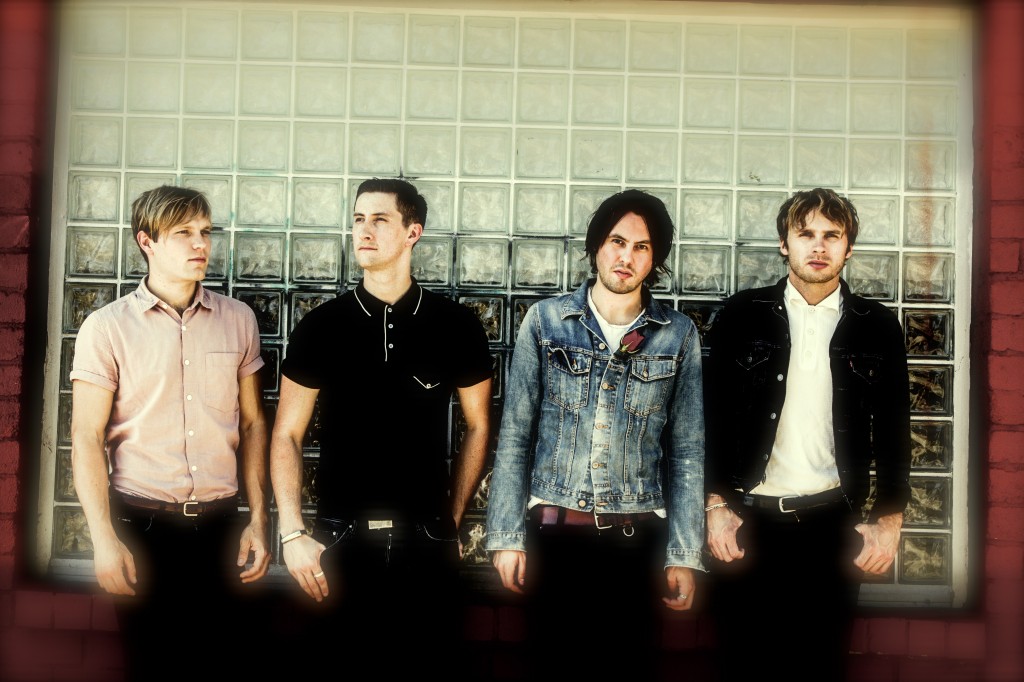 Interview was done by matt with Coyle Girelli of The Chevin

The trip from Leeds to The Chevin can be a short one or a very long one if you’re referring to the 4-piece band The Chevin that hails from Leeds, United Kingdom.  Storming the U.S. with an Olympics-style single titled “Champion” they’ll conquer David Letterman and Conan appearances in a 30-day period leading up to their September 25th album Borderland [SO Recordings / Silva Screen Records Ltd.].  We caught up with singer Coyle Girelli to talk about the rise, fall and rise that makes the band experience all worth it.

Speaking of change, the music industry is transitioning.  Do you love or hate the Spotify world we live?  How do you consume music other than your own?

CG: I don’t think It’s a love or hate thing.  It’s a very different musical landscape to even what it was 2 years ago and it’s healthy to embrace it.  I personally like the freedom and the instant ability to listen to whatever I want whenever I want.  It’s also great for discovering new music.  I see what my friends are listening to and can check it out and vice versa, and subscribe to playlists.  I’ve discovered some great music and artists on Spotify and use it pretty much every day. Would I rather, as an artist we got paid a lot more by Spotify?  Yes, of course I would but that’s a whole different issue.

Pete Galli has a deep resume and is a respected artist manager.  Seems like a perfect fit for The Chevin.  How’d you guys get hooked up with him?

CG: Pete is a fantastic manager and person.  I have known him for a few years, and he was the first and only person I approached to manage The Chevin.  When he said he was in we were thrilled… it’s good team and a perfect fit!

The “Champion” has a really emotional connection inside of both the track and the visuals as part of the video.  Is this song a state of mind or other?

CG: Champion is a powerful song, there’s no doubt about that.  Since it’s early beginnings in demo form it resonated with people.  It was a song that was therapeutic to write and is always therapeutic to sing.  I think with the song being so emotional, the video was naturally always going to capture that.  Well – both videos.  I prefer the first video myself. I like that it’s relentless, fast paced and surreal.

You recently played The Late Show with David Letterman.  He seemed to really make a connection with your performance.  How real or surreal was this experience?  Does this prove all the hard work does pay off? Is the studio really that cold?

CG: Letterman Surreal and amazing… that studio is freezing, but I don’t think I noticed it with all the adrenalin.

The whole day was all secret service, helicopters, police lines and huge black limo’s.  It was all pretty crazy. And to play in the Ed Sullivan theater was special. Letterman’s reaction to us was nice as well.  I only paid him a fiver for that one…  Still waiting for an invite to The White House though.

Borderland is out on September 25th.  Does the album have an under lying story or theme to it?  Does the title have multiple meanings?

CG: It was written during a pretty rough time personally, so there are themes of loss, love, hope, and the fragility of life that run throughout it. This album was extremely therapeutic to write and got me through a pretty shitty time, but the sound and the feel is hugely up-lifting.  It makes you feel good, even though the lyrics can be pretty dark and heavy at times.  Borderland was the obvious title and came pretty early on in the recording.  We were physically on the border of the US and Mexico recording out in the desert, so there is a literal meaning, but it also sums up our situation at the time.  We were on our own when we recording the record.  We had no label, no manager.  We had borrowed the money from friends and had taken a huge risk.  It was do or die and so in that sense we were in no mans land, on the line, the border between success or total failure.

Do you find the half decade of dominance by electronica has influenced your music?  Are you fans of “EDM” genre’d music?

CG: I love all music.  The genre to me is irrelevant.  I like a lot of electronic music, and I think it always subconsciously sinks into you.  In terms of it’s dominance, music has always been very cyclical and the natural reaction to half a decade of electronic dominance is inevitably going to be a more organic sound which I think you’re seeing the early beginnings of crossing into the mainstream in bands like Mumford & Sons.

Having spent a lot of time in the U.S. branding, recording, producing, touring and performing is there a particular city you call your home away from home?

CG: New York. I love that city.  It felt familiar to me before I’d even first stepped foot on it’s asphalt.  Like it had always been a part of me.

Name one piece of gear that’s influenced your music in the last 12 months?

CG: I like to buy and learn new instruments.  I bought a Mandolin recently and that got in to a few songs.  We’ve been touring pretty much non stop for the last 12 months though so I don’t think any one thing has had too much influence on me.  I’ve not had the time.  I’ve got some pretty crazy plugins that I’ve been messing with on the plane from time to time.

We work with a lot of baby bands and emerging artists.  You set the example for tenacity and determination clearly, to anyone listening.  What would you tell a young person who’s ambitions are to start a band?

CG: Follow your instincts, sing from your soul, think outside the box, strive for perfection and most importantly enjoy it.  Music is love so spread it.