The Grammys Wrap Up

Brought to you by CBS!

The 54th Grammy awards were kicked off with heavy hearts with the sudden passing of Whitney Houston in the Beverly Hills Hilton the day before, merely hours before mentor and guide Clive Davis’ pre-Grammy party.

The show kicked off at 5pm sharp and was hosted by LL Cool J who manages to have not aged a single bit in the last 20 years.

New Jersey rock legend, out of my hometown Freehold, Bruce Springsteen kicked off the show with a performance of “We Take Care Of Our Own” off his forthcoming album Wrecking Ball. Then Bruno Mars performed followed up Bonnie Raitt and Alicia Keys dedicating “A Sunday Kind of Love” in memory of Etta James.

Adele wins the first on-tv Grammy with Best Pop Solo Performance for her tune “Someone Like You”, and its her third of the evening as she already collected Best Short Form Video and Best Pop Vocal Album. 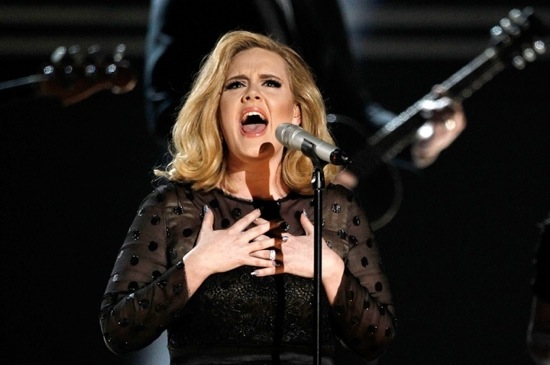 Chris Brown performed “Turn Up The Music” to what felt like a direct rip off lyrically to LMFAO‘ “Sexy and You Know It”.  First time hes been at the Grammys in three years since his infamous legal woes and his performance was just “meh”. Kid can dance though, but I’m feeling like we need more from Chris.

The next award was Best Rap Performance and that went to Jay-Z and Kanye West, both not at the Grammys, for their song “Otis”.

I was thoroughly bored with Jason Aldean and Kelly Clarkson‘ peformance.  Sorry.

I loved the Foo Fighters performance of “Walk”, but I’m not a fan of the song!

Rihanna did ok with what she did sing and Coldplay seemed to put on a “B” performance if I ever saw one.  Rihanna’ choreography and Coldplay’ stage were pretty rad though!

Best Rock Performance goes to the Foo Fighters (who had 4 awards to this point) for their song “Walk”.  Jack Black introduced them to their performance earlier as a band that hasn’t lost their indie cred and in classic tv call-back Dave Grohl said “We made this at home in my garage”.  Whats more Indie than that?

Maroon 5 performed “Surfer Girl” followed up by the best performance of the night, in my opinion, from Foster the People who covered the Beach Boys classic “Wouldn’t It Be Nice”. 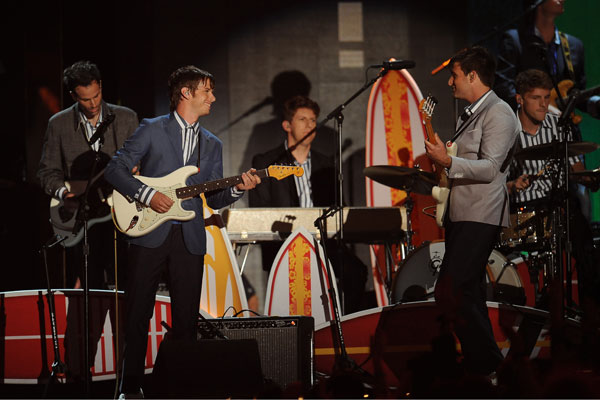 These were lead-ins to Ryan Seacrest announcing the return and performance of the Beach Boys who sang “Good Vibrations”.  They did a great job, new album and tour up next!

The next performance was a ballad by Paul McCartney with Joe Walsh (of the Eagles) with a full orchestra.  I understand his attachment to quite possibly the greatest pop band ever, the Beatles, but his solo accomplishments are just boring in my opinion.   Paul was introduced by Stevie Wonder who did an impromptu and short harmonica performance of “Love Me Do”.

Taylor Swift who had already won two awards to this point for Best Country Song and Best Country Solo Performance performed “Mean” with a banjo.  Cut me now.

Song of the Year went to Adele for her song “Rolling In The Deep”.  Deserved!

Katy Perry kicked off with “E.T.” and had the track purposely melt down into a new tune called “Part of Me”. Was this a song about Russel Brand?  Lots of fire and pretty good vocals for KP.  I actually liked this performance!

The next award was for Country Album Of The Year which went to Lady Antebellum. #great

Fresh off throat surgery, the diamond selling Adele performed “Rolling In The Deep” almost flawlessly. A very comfortable and controlled live performance.  A proper follow-up ad by Target claiming to have retail-exclusive tracks!

The, Rhinestone Cowboy, Glen Campbell (who is suffering from early Alzheimers disease) fresh off his Academy Lifetime Achievement Award win had an inspired performance!

Best New Artist goes to Bon Iver, who beat out nominees The Band Perry, J. Cole, Nicki Minaj, and Skrillex.  Although, Bon Iver is the only artist I actually have music for in my iTunes, I do believe that Skrillex should’ve won this award for his sheer determination in 2011.  He created a genre, made millions of new fans and seems to really love what he’s doing.  This is what the music industry is about in 2012.  Put your nose down, carve out a niche and share your music with the masses.

Academy President/CEO Neil Portnow talks about MusiCares.  We also help artists with a plethora of service through our foundation (The Project Matters).

In a last minute performance, Jennifer Hudson performs the late Whitney Houston’ “I Will Always Love You” changing the lyrics from “I’ll always, I’ll always love you.” to “Whitney we’ll always love you”  Nice touch Jen.  I had goosebumps for the first time tonight. 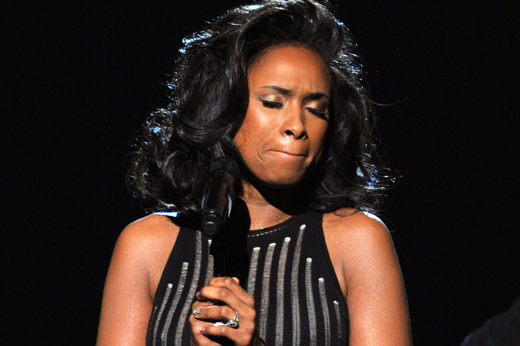 Our review would’ve continued, but our websites got attacked.  So, in honor of Whitney Houston our Grammy wrap up will end here.