The Leto Look Isn’t Working For You, but You Sure Put Out A Killer Album: The All-American Rejects Kids in the Street 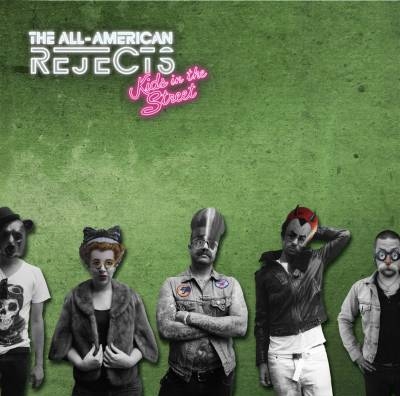 Yes, I have always loved The All-American Rejects.  Yes, lead singer Tyson Rittor’s vocals put me in a state of euphoria.  But, the magnificence of Kids in The Street goes beyond my generational and feminine tendencies.  In fact, I was a bit disappointed in their past efforts at putting out a great album, which is why when the 43 minute, 10 seconds were completed, I was ecstatic.  Not only did they blow away their past few albums, but this instantly landed into my top albums of 2012.  Nine out of the eleven tracks are epic.  They all have these amazing moments that come out of nowhere, yet are so perfect.  And then of course Tyson’s vocals give me goosebumps.

“These songs are really good, but I don’t know about this birds and the bees’ song…” my friend shared (which, agreeing completely to) is where the nine out of eleven comes in.   Wondering who The All-American Rejects (AAR) should fire for allowing “Beekeeper’s Daughter” to be the first single off their fourth record was my initial thought while listening to one amazing track after another.  I heard this single before acquiring the album…and watched the music video.  Where the hell is the rest of the band?  Where is the room they should be playing in?  And why is Tyson trying to look like a 30 Seconds To Mars musical?  This video did a poor job of getting me excited for the album, very poor.  However, because I have enjoyed AAR in the past, I decided Kids in the Street deserved a chance.  And we can all be thankful for my dedication.

The electric guitar screeches on “Someday’s Gone,” alerting every nerve in your body.  It quiets down for verses and most of the chorus’, with a bridge ending that brings the song full circle.  The “Beekeeper’s Daughter” is next, which actually allows you to listen to the lyrics more than just being annoyed at the video (yeah, they had to mature from their garage band videos at some point, but not to this).   Lyrically we have a typical uncommitted man-whore on our hands, with the victim being “invisible like you want her” (“School Friends” – Now, Now).   A wacky parallel I found while listening to both albums this past week.  The sadness I felt for the innocent females in “Beekeper’s Daughter” was the same empathy I felt for Now Now’s  “School Friends,” a third person perspective on a heartless man who treats women quite similarly to Tyson’s character.  The whole thing gets me quite depressed.

There are a collection of powerful ballads (“Heartbeat Slowing Down,” “Out The Door,” and “Bleed Into Your Mind”) and not in the Celine Dion kind of way.  They go to an emotional, instrumental, and magical place which creates the powerful aspect.   I’m not a big fan of “mellow” tunes as you know, but these really hit the spot and have this edginess to them that result in “Out the Door” being on my top 100 list of songs.  In between these there are upbeat, killer tracks that evoke an epic nature with orchestrated synths and choir background vocals (“Kids In the Street,” and “Gonzo”).  Then there’s “Fast & Slow,” which is my ten out of eleven.  It has some grittiness and emotion, which I definitely respect, but it just doesn’t really fit the rest of the album.  Lyrically it’s on par with “Crazy Bitch”…okay, maybe not that bad.  The final two tracks are better than the first two, showing off the softer side of AAR.  “Affection” is a saucy, good ole’ AAR tune, a bit more modernized musically, but could definitely be found on “Move Along,” or Across The Universe soundtrack for that matter.   Leading out Kids in the Street is the acoustic “I For You.”   A nice return to Tyson and his guitar after the orchestra we so acceptingly appreciated on many tunes prior.

You had nothing better to do than count the songs I’ve mentioned and clearly knowing there’s eleven you wonder why I’ve only listed ten.  The reason is simple, there is a song on Kids in the Street that is so amazing – it deserves its own paragraph.  “Walk Over Me” begins with a French psychiatrist who Tyson opens up to in the first verse and answers back as in the second.  This storyline isn’t why I’m obsessed with this tune, it’s the melody, the vocals, the verses, the chorus, the bridge, the guitar solo, er…everything?   I instantly start shrugging my shoulders (like the nuns in Sister Act, not sure why….) and am sucked into the song where I’m despising any distractions that are stripping me away from experiencing the three minutes and fifty-nine seconds of heaven.

The All-American Rejects have musically matured since 1999, and though some of us are sad the “Why Worry” feel is gone (sadly accepting its inability to fit in today’s popular music sphere) we can fully appreciate where they’ve gone.   Well maybe not fully when considering this whole Tyson-on-Broadway thing.  AAR is back after their hiatus, charged, and ready to go – infiltrating our minds with well-produced, exceptional songs on Kids in the Street.