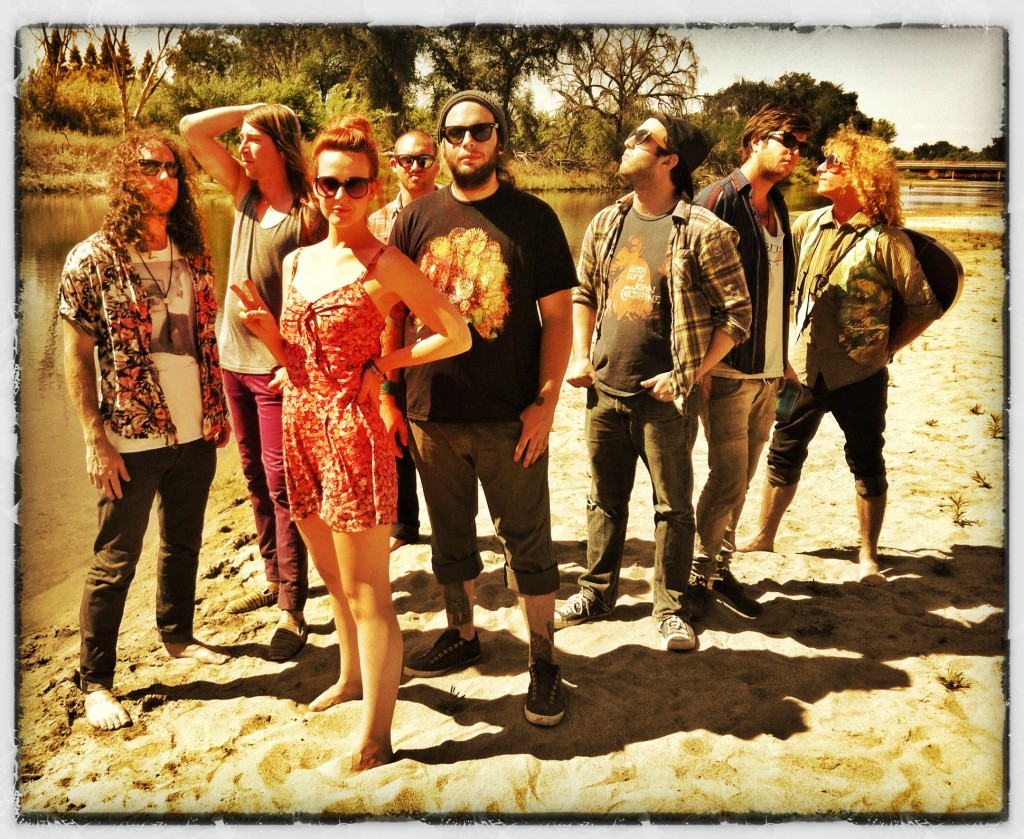 L.O.V.E. tidal waves over your body and into your bloodstream.  Being catapulted into self appreciation and peace among your brethren in the most positive non-sickening way possible. Normally artists mentioning the idea of me being nice to the annoying girl standing in front of me bobbing her head, results in the exact opposite feelings.  However, there is something about this group from California, forcing all good feelings out from their fingers into the instruments and then being humbly offered to the audience.  Nothing is forced, you just automatically subject yourself to these feelings because you pretty much have no other choice in your soul but to except this happiness.

The harmonies remind me of cloned Mates of State vocals, aiming for high notes all together creating pumped up group vocals.  Nothing is sloppy about the vocals or instrumentation, with everything spot on you are convinced that they were given some sort of superhero potion.

This all happened as a celebration of local radio station 95.5 WBRU’s annual Birthday Bash group of concerts.  However, the headliner (you may be familiar with Grouplove? My review of their latest album Spreading Rumors here) had to cancel due to illness.  This left The Mowglis and IAMDYNAMITE without a venue, but still the gumption to perform.  Luckily The Met welcomed them with open arms and included Royal Teeth in the line up.  Well this certainly left for a great show, even though my sadness of not seeing Grouplove still lingers.  The line was long, and the crowd was pumped, Mowgli’s fans united in the night’s inevitable arrival.

Royal Teeth pumped the audience up to a pleasant stir and got their dancing feet working with pop-y melodies and tasteful bridges.  IAMDYNAMITE followed and exploded the crowd with unimaginable guitar and drum solos slathered in Weezer-esque melodies.  Leaving me breathless I wasn’t sure how my emotions could be topped.  The Mowgli’s had a solution for this, they constructed a wonderhouse of epic jubilation that refused to accept anything besides singing voices, smiling faces, and swaying bodies.

Playing most tracks from their sophomore album (Waiting For The Dawn) they received an audience that was either hung on to every moment or joining in with their entire being.  As if people were being shot with positive darts, I had never seen a crowd, or myself, in such good spirits.   It was an extraordinary experience to be introduced to so many different types of uplifting melodies with a folk twinge on top of indie poprock that never felt like the same song.  All of The Mowglis’ songs were sung by different members during the verses and would exploit a specific instrument to act as the songs foundation as their show pushed forward.  “Waiting For The Dawn” was probably one of my favorites live with the different instrument additions tuning up in chronological order.  It could also be due to the incense having had a chance to settle nicely in the crowd among the previous sweaty stench.

If you ever are feeling down and would like to experience a spiritual revival of sorts, one stop shop at a Mowgli’s show.  Not only are you witnessing great music being performed by a fantastic group of people, but you will clearly get rejuvenated after such an experience.   Though it is definitely not mandatory, you may want to brush up on some lyrics so that you can become a part of the show instead of an included bystander.