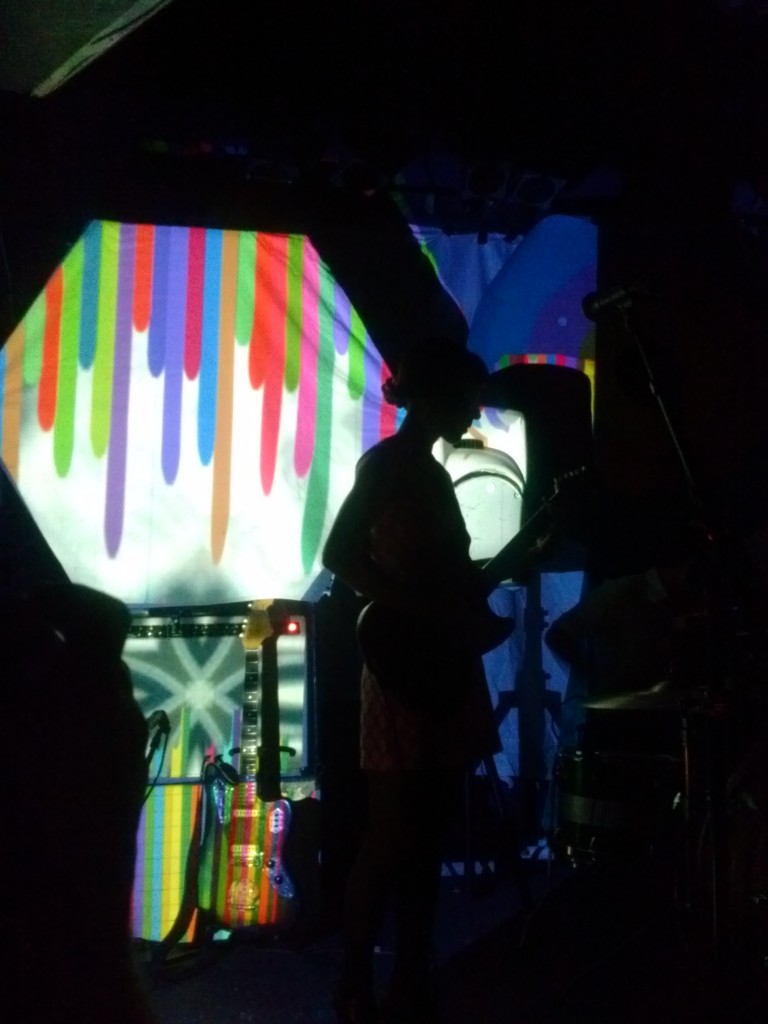 Sprinting on stage, plugging in amps while quickly soundchecking.  One spins out of the others’ way in a black and white ensemble tango.  Dropping off guitars, hoisting up the symbolic emblem of the “octopus eye;” twisting and cautiously stepping around on a stage not large by any means.  Fifteen minutes later the three ties and the lone dress were ready to go.  With the amount of instruments, projectors, amps, etc. it was unbelievable how quickly they were ready to introduce themselves to the hipster, and mostly male, Cambridge crowd.

The challenge that we encountered as an anxiously waiting group was where to feast our eager eyes.  Firstly you had Yvonne’s futuristic theremin boldly accepting both quizzical glances from the ignorant and anticipated smiles from the more knowledgeable.  Then there were the two flashing projectors, displaying 1960’s homemade-esque videos on a repeated and/or skipping sequence.  Yet, it was the four-piece, looking respectable as if they were attending a sophisticated dinner party in matching clothing (minus Miss Yvonne sporting a vintage patterned dress),  who continued to pull your attention from the previously mentioned contenders.

Playing their newest album Fever Forms [Peek-A-Boo Records] (Out Now ::: ktc review) in almost entirety, I was selfishly thrilled to the upmost.  Knowing the number of previous albums can be counted on more than one hand, I was nervous that I wouldn’t be able to hear all of “my” songs (I am such a selfish concertgoer).  In an ironically imaginative way, it was as if they were allowing me to live out my fantasy of them performing this album to the elite, as I had so described in my album review.  It was as if my vision of the album was coming true, including the portion where in one of the movies being shown, there were futuristic couples lying on couches eyes peeled to a screen of sorts.  Only, I knew that what they were watching was The Octopus Project perform, sealing the deal that my description of Fever Forms was being confirmed right in front of my eyes.

Now if you were anyone, but me, you would be paying attention to the fact that this entire set list sent you into a tailspin of goosebumps and psychedelic euphoria.  The jam session feeling was everywhere, embedded in the album seemingly on purpose (ktc interview with The Octopus Project), but the control and movement onwards was spiraling us onwards to the barrage of transitions.  Not a single body was permanently placed as you were being taken away on a heavily composed mixtures of perfected loudness (sometimes when bands try to carry out their noisy sound live, it comes off as just noise, whereas here you could hear each of the multitude of notes created, combined, and shot forward).  The downfall of this being that the microphones were not turned up over the instruments and the vocals were almost non-existent.  Due to the make-up of the songs, vocals are not a heavily used instrument in their latest album, but I was still reasonably saddened.

This performance will remain in my mind as one of the most memorable in connection of music energy and emotion, allowing me to catapult into their slick and distorted guitars, playful and delicate theremin, and upbeat and psychedelic keyboards amongst thick and light drum beats.  A plus, if you could even fathom more positives, was their kindness post show including Yvonne giving warm and friendly hugs to fans.  I must see them again and again and again.