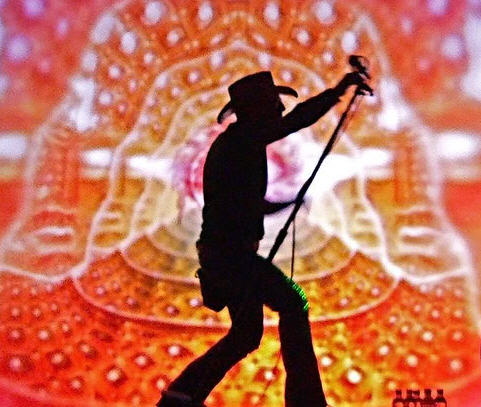 Just as the universe always works, a glimmer of hope has been offered during a time of loss and balance has been restored at a time it is so seemingly necessary. A week ago to the day, I learned that my favorite band, the heartbeat of my soul, STS9 is parting ways with longtime bassist and frontman David Murphy, forever changing the entity that has been an essential part of my life for over a decade. Today I found that my second soul band, TOOL, will be returning to the stage after a two year hiatus refueling rumors of an album in the near future, one that we’ve patiently waited for since 2006’s 10,000 Days. While one door in life closes, another opens, reassuring the complimentary forces off all things in life is at work, even in the world of music. Nine months ago I wrote a piece about Maynard James Keenan (read here) as I was gearing up to see Puscifer, the twisted, avant-garde rock group that he also fronts, at Coachella. I’ve always found myself completely enthralled, almost obsessed, with Maynard’s ideals and practices. His intelligence, artistic vision and complete obscurity expands far beyond my cranium’s reach and that’s what I randomly felt compelled to write about that April night. Was that post a glimpse into the crystal ball? I think so! I just locked down a sweet pair of VIP tickets to celebrate his 50th birthday at the Greek Theater in May, experiencing him not once, but twice in one night at the amphitheater when Puscifer opens up for A Perfect Circle. And now, I get my TOOL as well? Rest assured I’m thanking my music Gods for this one tonight, while last Tuesday I cried myself to sleep asking the same Gods why.

In late 2013, APC released a career spanning box set which features their latest track “By And Down” in addition to a 2 hour DVD with Puscifer titled What Is…Puscifer.  Clearly, he’s been working from all angles musically, not to mention Caduceus’s Cellar, his Arizona winery that has essentially been his top priority since it’s conception in 2004. My man has been busy! I admire his work ethic and respect the time he takes between projects to ensure perfection each and every time, even if it means waiting 8 years for new material. Today, I’ma happy girl. Although I won’t be seeing Sector 9 this weekend, there’s so much great music to look forward to in 2014. I can’t stay mad.

And balance was restored.

TAGS: Cinquanta, news that makes me happier than a hooker with a penis, 5 Star, miss you Birdie, #littlebros, music in Heaven