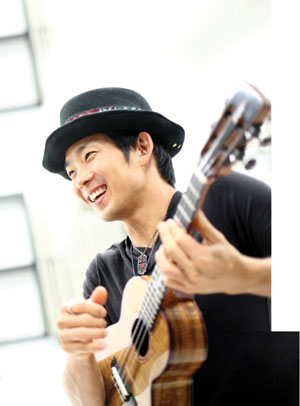 In his young career, ukulele (pronounced oo-koo-le-le) wizard Jake Shimabukuro has already redefined a heretofore under-the-radar instrument, been declared a musical “hero” by Rolling Stone, won accolades from the disparate likes of Eddie Vedder, Perez Hilton and Dr. Sanjay Gupta, wowed audiences on TV (Jimmy Kimmel, Conan), earned comparisons to Jimi Hendrix and Miles Davis, and even played in front of the Queen of England.

Its 2013, and new instruments usually come in the form of 0’s and 1’s or are controlled magically by oscillators and hand control as in the case of the Theremin.  To find an artist who’s taking a heritage instrument such as the Uke and transcending its capabilities to our plugged-in world is both commendable and quite important.  We’re all sped up by facebook, twitter, instagram so much that often we forget that art in-its-glory can shine with only one bell and no whistle.  Jake stands tall among contemporary musicians who dominate their instruments so much that just a single direct input to a PA does the trick.

If music is headed in this direction, we’re all gonna be ok!

Join Jake for a special night of music on September 12th at the John Anson Ford Theater in Los Angeles. TICKETS ARE STILL AVAILABLE HERE!

The rest of his tour dates can be found here.