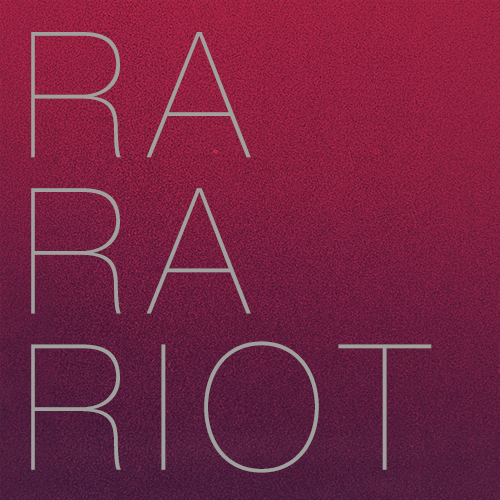 And this is what happens when you lose your cellist.  You make up for their sound by implementing one sound…then realize all the other sounds that would glorify the replacement.  Before long, you have created Beta Love – a dancing induced menagerie of technically intelligent synthpop.  If you hadn’t heard of Ra Ra Riot previous to this release, you would think it was one, or two, dudes with a sweet korg and fantasies of dj’ing LA nightclubs of the late 90’s era.  If you know Ra Ra Riot, you are clearly aware they’re a four-piece (once a five) band out of Syracuse and not only have a bassist and guitarist, but also possess a charming violinist.  They’re quirky and are able to bust out some great tuneage, which inevitably binds them closer to a Passion Pit as opposed to a Miike Snow.

As the album spins, I am pleasantly reminded of a pop album from the late 90s, early 2000s. Flashy melodies glamorized by rich simplicity, wanting positivity to leak through you in energetic taps and nods.  These tracks are pretty straight to the point, but certainly pack a lot in their punch.  Ra Ra Riot kicks it old school and provides another reason to compare Beta Love to an age of fast and fun synth.  Sometimes we don’t want hour long ascending, descending, ascending and descending loops.  Instead, we want to just have a good time with the longest song topping off at 3 minutes and 13 seconds.

“Angel, Please” was a clincher for me, servicing my needs for a powerhouse vocal responding to a repeated ascending and pitch-changing “I know you were.”  The more modernized “What I Do For U” digs deep for its beats, keeping vocals on a quieter volume then dropping the beats to cause a thicker vibration.  “I Shut Off” jumps from the album, but not as much as it leaves you breathless from their studio version.  Wishing violinist, Rebecca Zeller could be heard a bit better on the album is some negative energy brought back to Beta Love, but not to worry, listening to “Dance With Me” will disregard such bad feelings.

This is what you want to be listening to when you wake up in the morning, dance to on your drive home, and share with you friends without being embarrassed about them being bored or unsure of your music taste.  Coming off a tad Gotye in some places (“Is It Too Much,” “For Once”) you become comfortable with the falsetto of Wes Miles.  The exquisite balance between his vocals and the violin creates a retro feel, and of course if you throw synth chords and you know you’re in for a good time.  The dance-electro-pop feel goes a bit deeper than surface pop.  There are snippets of radically flirtatious riffs, solos, and outros (“That Much”) where returning to the beginning to catch that moment in its perfect placement is inevitable.   Take the caffeinated church organs in “Beta Love’s” melody, or the bass line carrying it along – a step above.  You won’t only be dancing; you’ll also be dancing and being surprised and satisfied at the same time.

There’s no doubt Beta Love is a transition album for the foursome.  Yet, as Ra Ra Riot switch gears, they are able to do so with ease and catchy melodies, showering their sound with quality tracks invoking happiness (and maybe some bad dance moves) from listeners.  I’m looking forward to music videos from this latest album to see if they’re changing more than just their sound…