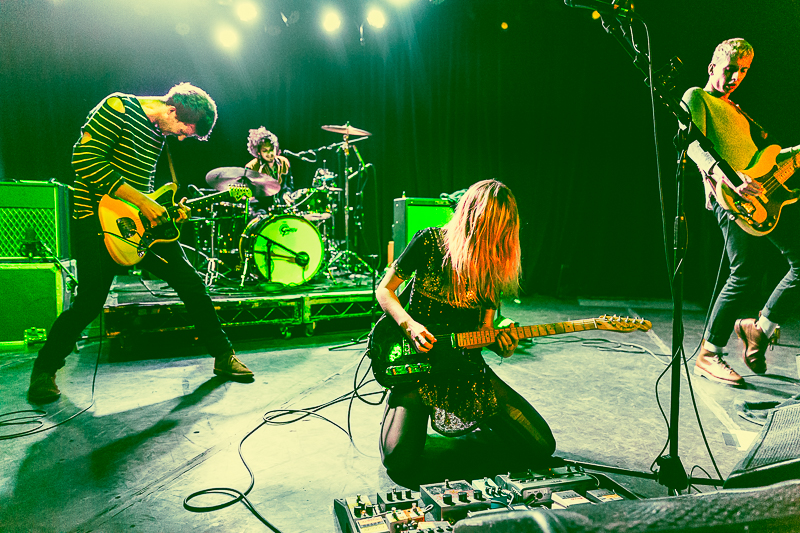 Wolf Alice played to a sold out crowd at the Roxy on Monday – a surprisingly mature crowd I will say: rocker dudes, couples, and I imagine a slew of industry peeps all there to support the London based vintage rock quartet whose star is definitely on the rise. Lead singer and guitar player Ellie Roswell is a complete doll – tiny as can be and clearly bad to the bone playing guitar, and well, on every song. She and her band mates are unbelievably cohesive; you can feel a real organic connection between the four of them. It’s in no way forced and there’s a real authentic feel to their overall look, feel and sound, reminiscent of a few grunge/alt rock bands that hit hard in the 90’s.

The show, their third in LA, was indeed impressive from start to finish. “Blush” (my personal fav) was like a full on spiritual movement for me. My bestie and I have fallen madly in love with the lyrical brilliance and musical storytelling of this song so it was a really special moment to finally see it live. “Bros” was also one of the more memorable parts of the evening, as I was looking at my friends and really feeling the essence of what the song is all about – like truly bro’ing down with them while we sang along.  I about lost my mind (and snapped my neck) during the breakdown on “Giant Peach,” it’s just too good. Much like “Moaning Lisa Smile” which also got me all hyped up. If you were there, ya probably saw my blonde locks flying.  Overall, they killed it from beginning to end and it ended up being an epic Monday night in Hollywood.

If you’re not familiar yet, you probably will be soon! I just heard “Bros” on 98.7 tonight and there’s definitely a buzz going around about these babes.  Their debut album, My Love is Cool, is out June 23rd. Get that.