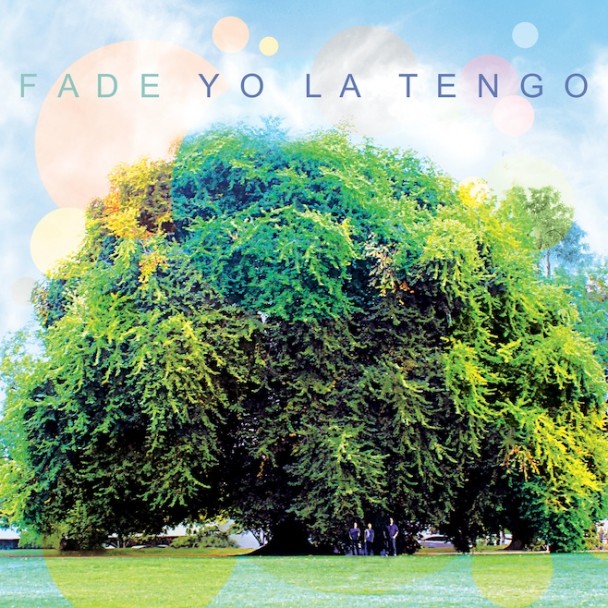 Sputtering of rain gently taps the windows, temporarily turning into droplets of sleet, before changing its mind back again.  The peace of the indecisive weather settles as an appropriate background to your cozy warm atmosphere inside.   Holiday decorations line furniture surfaces and any other empty nooks and crannies, while glowing lights add extra light to your dimmed lamp’s glow.  A soft melody is strummed with a more vibrant electric guitar whispering its own story.   Symbolic strings and horns with a 1980’s attitude are faded in and out of an intimate forty-six minutes.  A sensible backdrop for a reflective and peaceful setting, Yo La Tengo’s thirteenth full length album Fade [Matador] (Out January 15th, 2013: Pre Order here) focuses the listener’s attention without disrupting a personal moment of thought.

Fade is a creation of experienced instrumentation carried through an applicable context of sorrowful yet insightful ideologies.  Each song has glorious movement, focusing on mellow guitars with delicately pleasant riffs and transitions, or orchestration.  Dissecting each song to specific instrumentation is as satisfying as listening to each song as a whole with all the pieces together.  With a track like, “Cornelia and Jane,” you can picture all the musical pieces being brought in at separated times to build on the sound coming before.  A conductor; pointing and raising, dropping and pausing a multitude of sounds, performed by talented musicians.

Being able to compare Fade to Nick Drake (“I’ll Be Around”) or Ben High (“Is That Enough”) are obvious in their quiet themes and melodies of realism and sadness.  For YLT, there is an intuition of human connection and camaraderie that tends to move along a more positive journey.  Though “Ohm” tries to wrap its head around tragedy (something specifically meaningful in our present state of mourning), it does so, hand in hand with others.  Whereas that former artists were sharing their messages as one voice, Yo La Tengo has background vocals in most songs supporting the lead with soft echoing.  Musically YLT represents the therapeutic idea of it being better going through any difficulty, however personal or public, alongside someone than alone.  The tracks on Fade seem to prove that spattering of positivity can be harnessed in harmonies and duets, of course a drum beat, maracas, and horns can also be helpful.

Playing their annual 8-day Hannukkah show at Maxwells in their Hoboken hometown in New Jersey, YLT has always been about collaborating and making connections with others.  Furthering my previous correlation between notions of optimism with human connections, they certainly spread their support through nightly special guests.  Fade is an album that’s relevancy will always be present.  Finding yourself in a quiet setting for retrospective purposes should then lead you to putting your coffee mug down, slipping on your shoes and zipping up a jacket.  To which you are going to meet your friends.

“Sometime the bad guys go right on top, sometimes the good guys lose.  We try not to lose our hearts, not to lose our minds…But nothing ever stays the same, nothings explained.  Cause this isn’t the road we know.  Lose no more time.  No time.”

TAGS: I Have It, Hannukah Stuff, Christmas, preparing for the end, talented influences, indie famous