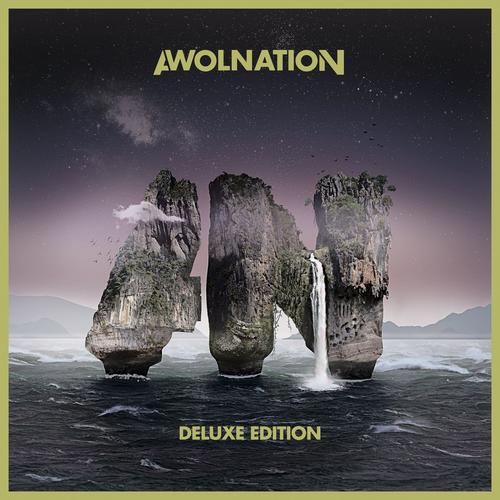 They need no introduction or back-story, you know AWOLNATION and have already made your heartfelt passion clear.  This deluxe edition of the album we all love was released November 19th, two years after our ears first feasted upon fourteen impeccable songs.   Whether you’re a fan or roll your eyes every time “SAIL!” is cast your way, this is indeed quite a nice little 18 track addition.   Having love for all your hate, Aaron Bruno and the rest of the band have released a two disc combination of B-sides, remixes, and of course, those original tracks of mind-blown euphoria.

If you have never dipped your toes in the sea of AWOLNATION’s Megalithic Symphony, haven’t come into contact with choirs aspiring from the heavens, horns grittily sending you into a 1940s nightclub, outlandishly mesmerizing chorus’, spiritual guidance for self-confidence, and an almost 12 minute bundle of bubbling transitions you really have been missing out.  As if there’s about twelve musical genius’ shuffled into Bruno’s mind, you barely know what you’re coming up against in the pop rock catchy-as-all-hell creation.  A world in which you never have to worry about what track you’re on because everyone is fabulous, you learn the words as fast as you can so you can sing and scream along, and you can run telling all your friends and strangers about it (including old men on trains).

So that was all about disc 1.  Besides all of that….the deluxe also features the sweet jacket patch, and warm-weather based surf wax comb, oh and 18 more songs.  Most of these are remixes you also receive a live version of “Soul Wars” (which I find a bit unnecessary being the only live song and it being more screaming than anything) and six rarities/B-sides including the latest single “THISKIDSNOTALRIGHT.”  The remixes are from a plethora of djs and artists and though some songs are repeated (“Sail” having five appearances), six of AWOLNATION’s tracks have been played around with.

“THISKIDSNOTALRIGHT” comes as the first single off of AWOLNATION’s second LP slated for release in 2014.  It’s quite a fantastic tune, heavy bass line and catchy sing along chorus make this is a typical song for them, maybe even branching out into the more rock side of their genre.  Following this, the other tracks on the second disc may have been heard during their tour, such as “MF.”  Most allow you to see their fitting on the B-side, though they are fun and dance-able, they don’t tend to match the epic nature of the first full length album.  Bruno tends to implement more rapping and vocal changes within the verses, which may be a positive if you enjoy this sort of thing.

You may own, or have heard Megalithic Symphony the first time it came around, but giving it another go with so many more tracks is a pretty good suggestion.  With so many new tracks you probably have not heard before, it clearly has a lot to offer.  Even re-listening to the first disc again will issue all those warm, cozy feelings you once had.  Besides, how else will you receive an AWOLNATION jacket patch?

TAGS: up all night, Up Until Now, Project Aspect , rain in LA, Thanksgiving a week away!