You, Me, and Everyone We Know. No, Like Literally 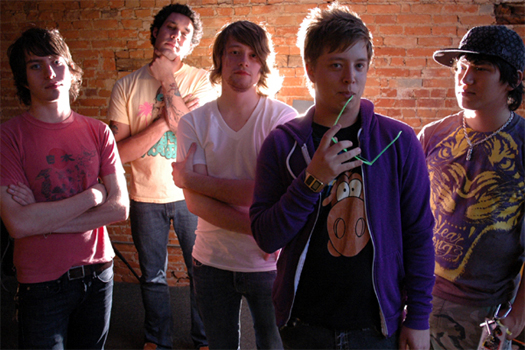 We didn’t realize that You, Me, and Everyone We Know (YMAEWK) was not only the headliner of the night, but also the amount of bands that would be playing at the outdoor show on a cool spring evening.  “It starts at 6, so we can get there at 5:30 and be fine,” I strategically said, not realizing what sorrowful doom was in store for us.  With the concretely documented line up being Orphan and The Poet, Squid The Whale, and my long time favorite, You Me and Everyone We know, it was bound to be a great early show in Providence.

Ben Liebsch’s You, Me, and Everyone We Know has gone through multiple bandmember changes and most recently has undergone thematic changes with Liebsch’s epiphany of sorts of the message that he wants to send in his new EP I Wish More People Gave A Shit.  Instead of gang vocals behind melody changes preaching a lifestyle of alcoholism and past regrets, we now are presented with idelologies such as cognitive dissonance, rape culture, and reflections of his previously traveled paths.  Of course these are surrounded by screaming mob vocals, uniquely Liebsch vocal transitions, swirling between upbeat pop punk rock beats.  Needless to say, when I found that YMAEWK was touring and hitting Providence along the way, I knew where I needed to be.

About two hours from when doors were supposed to open did they allow us in.  Waiting with the opening bands and their friends outside for an hour and a half, my nerves were already on high alert.  Two 6 year olds, three cars full of instruments being unloaded, and ten drifting cigarettes’ smoke in our direction later we stumbled into a less than magnificent outdoor arrangement.  Walking in with the sound guy and his two kids should have informed us to leave and come back later, but we were disgustingly ignorant.  Sitting on the very edge of ripped couches, we waited…and waited…and waited for the first band to get on stage.  It was about 8 at this point and no one had even played yet.  Thinking, of course, that it would just be three bands, I figured I should just stay put.

No soap in the bathrooms (hand sanitizer anyone?), a clogged sink, and the bands arriving and setting up from the indoor show that apparently would be playing the same time, there finally was music streaming from the outdoor show.  They were awful.  They were about sixteen years old, probably never practiced before, and made me want to drink heavily (though I refused since there was no soap in the bathroom).   Finally, they were finished.  Okay, so one more band then YMAEWK, right?  Wrong.

Five bands later, shivering in the 50 degree darkness of night, where going inside to hear the heavy metal bands shrieking about being “a Nazi boy” was a relief to the pitiful nature of outside finally entered YMAEWK on stage.  Surprise, it was an acoustic show.  My friend and I looked at each other and laughed so hard at our fates of the night we probably could have cried if YMAEWK was mediocre.

Ben Liebsch was about as fed up as the 10 people that were left at 11 o’clock that night headlining a show that “started” at 6.  His annoyance came across in sarcastic humor that left, what was left, of the crowd tiredly giggling right along with him.  Playing backwards due to the reverb his guitar was causing on the speakers until he laughingly realized that he was like the HTC One BoomSound commercial.  Yet, among the tired, freezing, sore muscles we stayed and were sucked into the lyrically and melodically addicting nature of YMAEWK.

Playing songs off older albums led us all to singing along, excited for the chorus or bridge to hit so we could all giddily experience the emotion we all have waited for in unison.  He gave his all, all ounces of energy were spilling to the smallest crowd he probably has ever played to since he started. Sharing his pride of being able to do an acoustic headling tour amongst his anxiety, which was previously subsided with alcohol, by playing at this joint his confidence was seriously jolted with being cast in this outdoor show while inside was an unknown heavy metal band with warmth, lights…and a crowd.  Taking a positive spin, Liebsch admitted his need for a humble perspective and then continued playing the rest of his set.  During the bridge of So Young So Insane’s “I Can Get Back Up Now,” where Max Bemis of Say Anything is typically featured, Liebsch rolled out with the chorus to “It’s A Metaphor, Fool.”  I nearly lost my mind.

It was now well into the early hour of the next day and before I left in both relief and sadness that YMAEWK had finished (after all the waiting) I made sure to give a quick compliment to the very humble and kind Ben Liebsch.   Apologizing for the extremely lengthy wait, I stiffly walked away, promising myself I would never again return to this falsifying line-up, soap-less,  horribly run Simon’s 677 venue.

John Taffer, shut this bar down.