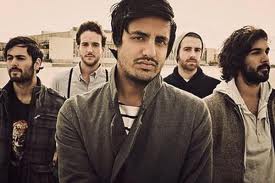 Lights go out, crowd gets wild, but instead of the venue music being turned down, it gets turned up.  Kanye’s “Monster” is blasting through the building and the audience is loving it.  Grouplove comes bounding out onto the stage, rocking out to Kanye with the audience.  No doubt about it, Grouplove is definitely going to keep this ferocious energy throughout their performance.   “Monster” transitions to “Lovely Cup” and every member is either dancing or head mashing with huge smiles on their faces.

Being an avid fan, I knew each song they jammed out to, but never knew who exactly sang each song.   Hearing the different vocals for some of the tunes (“Chloe,” “Spun”) I was not sure who I was hearing, only knowing that it was different.   I also wasn’t sure how they would make this very multi-genre’d album flow on stage.   My two questions were answered when Hannah Hooper and Christian Zucconi faded from lead vocals for “Spun.”  Andrew Wessen swapped his guitar for a ukulele and took the focus.  This was a fluid transition and Hooper was just as into this as she was during “Naked Kids.”  The transitions continued throughout the performance, with the most entertaining bassist I’ve seen, Sean Gadd taking main stage for “Chloe.”  Even with drummer, Ryan Rabbin, he had his moment in the spotlight when ironically, the stage went dark and he used light-up wire brush drumsticks.  Grouplove completely focused on the percussion in the song, giving me a new sense of appreciation for “Slow.”  The differentiation between the vocalists and music styles (folk to pop to rock n’ roll) was a communal effort forming this wonderful blend of perfected ideologies.  Making everything I already loved about Grouplove even better, I was disappointed they were the opening band and knew their songs were numbered. 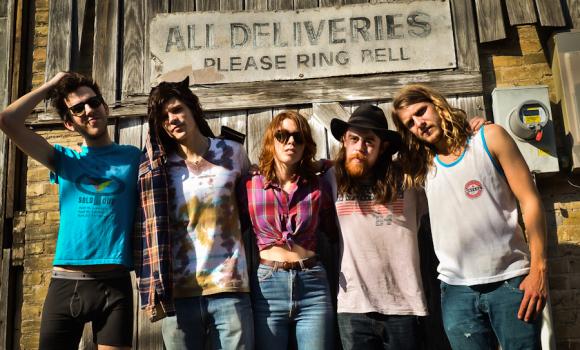 From my location, most audience members didn’t seem to know Grouplove very well.  However, by “Tongue-Tied” the crowd was belting out the lyrics, not able to keep still, and I finally had people drown out my voice.   This was one of those perfect moments at a show when everyone’s endorphins are pounding through them and nothing matters, but that moment.   Celebrating Whitney Houston, “I Wanna Dance With Somebody” followed “Tongue-Tied” with the audience staying right along with them.   Ending with “Colours,” I quickly tweeted how wonderful they did and my questioning of why they weren’t the headline band.  I was able to read random tweets from the crowd, praising Grouplove to the utmost, like they rightfully deserve.

Young The Giant’s alternative rock vibe was entirely present throughout their performance.  Yet, the importance of everything sounding accurate to the studio-version made for a respectable and appreciative notion of the band.  Picturing lead singer, Sameer Gadhia during rehearsals saying “No, no.  I want it to sound exactly like the album,” until getting what he wanted.  The result, a microphone that distorted and recorded his vocals, along with a regular mic, of course.  Going back in forth between mics to get the “perfect” sound, while rocking out with the tambourine, Gadhia definitely had his work cut out for him.  However, you knew it was exactly what he wanted, giving the audience what they deserved and expected accurately from the album.  And it wasn’t just the microphone.  Between him switching to the keyboard, and bringing in a string quartet, having two drummers, there was a sense that we were getting what was intended to be heard.  I find this highly respectable and made for quite a powerful show.  I was entirely impressed, and though not a big fan of Young The Giant, I give them major props and will always back them up as putting on a kick ass show.  Gadhia was entertaining to watch as he danced around, played the cymbals with his tambourine, and finally crowd surfing.   They played a handful of new music, and let me tell you, it is something to get very excited about.  I was rocking out to these songs more than their other ones.  There is a greater combination of different sounds, as opposed to tracks off their first album which can sound similar.

With their music being more on the ‘chill’ side, when they came out after encore and stated with R Kelly’s “Ignition,” the audience went mad.  They wanted to start rocking out again post-Grouplove and Young The Giant’s music doesn’t pose many chances.    So when Gadhia arrived at the chorus, House of Blues looked like an alcohol induced nightclub on a Saturday at 2 AM.  Their final song was “My Body,” and the energy this audience had stuck with them through the end, out the doors and into the streets of Boston.  A perfect way to end the night.

Excited for Young The Giant to release their new album (no announcements have been made), I’ll be keeping a close eye on them.  And next time Grouplove comes around, their name will be on my ticket with smaller fonts for other bands who will be opening for them.